Mi 10S, a new Mi 10 series smartphone by Xiaomi is about to launch on March 10

The Mi 10S, a new Mi 10 series smartphone that Xiaomi is rumored to be working on will arrive with the recently announced Snapdragon 870 chipset, as per recent reports. The wait is over because the company has officially announced to launch Mi 10S in China on March 10. Xiaomi confirmed the Mi 10S launch date via an official post on Weibo. Xiaomi founder and CEO Lei Jun further shed light on three key features of the upcoming device. 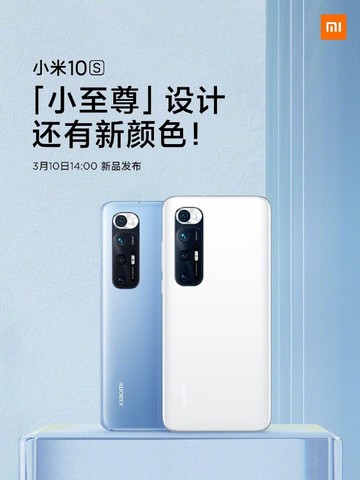 The CEO says that the new Xiaomi device will come with a design that is similar to the Xiaomi Mi 10 Ultra which the company launched last year. It will pack Qualcomm’s Snapdragon 870 chipset inside along with high-end Harmon Kardon speakers for immersive sound quality.

By looking at the images of the device shared by the company, the device will feature a quad-camera array at the back. There will be a primary 108MP lens along with three other sensors, possibly an ultra-wide lens, a macro lens, and a customary depth sensor for portrait pictures. The pictures of the upcoming Mi device also reveal that it will launch in three color options – black, white, and blue.

The Xiaomi Mi 10S was certified as M2012J2SC by Chinese regulatory authorities TENAA and 3C, as per reports. The device will come with a 6.67-inch display with a 90Hz screen refresh rate. There will be a 4,680mAh battery with support for 33W fast charging inside. And, it will run the Android 11-based MIUI 12.5 out-of-the-box.

So here were some of the key details about the upcoming Xiaomi Mi 10S although there is no information on the price and availability of the device at the moment. The launch will be covered this week, so stay tuned for more details.

Also Read: Google’s competitors are on their way!

Previous articleGoogle’s competitors are on their way!
Next articleThe OnePlus 9, coming soon!